Humbodt Rara on sale in USA

On occasion, Humboldt Rara appear on the international market for collectibles and rare manuscripts. The „Lot 206: Alexander von Humboldt“, recently put on sale by the Auctioneer Directory invaluable.com, appears to be especially interesting.

It shows a letter to mineralogist Louis-Benjamin Fleuriau de Bellevue and several sketches of the superposition of rocks and geological formations. The sketches appear to be closely related to the geognostic chart Humboldt had already elaborated upon during his stay in La Ciudad de México in 1803.

Letter in French, signed „Humboldt,“ three pages on two adjoining sheets, 4.75 x 4.75, no date [likely circa 1822-23]. Letter to mineralogist Louis-Benjamin Fleuriau de Bellevue, sending his friend Fourier’s book, in part (translated): „In which the problem of heat movement is completely solved. Ridges and edges are special cases only…You will also see in paragraph 52 that the author believes as I do that the heat cannot be compared to any fluid, water in oil…I am asking you to please let me visit you on Wednesday at 11 a.m.“ Includes multiple detailed geological sketches and diagrams: first set is four pages on two adjoining sheets, 8 x 12.75, featuring descriptions of earth formations (clay, chalky, and lignite); a large diagram related to the superposition of rocks, with descriptions of each one’s appearance and type; sketches of landscapes; and numerous small sketches of various earth and rock textures, including granite, syenite, gypsum, and limestone; and another sketch of a superposition diagram on an off-white 7 x 9.5 sheet. In overall fine condition. Accompanied by a large print entitled ‚A Proportional and Tabular View of the Superior, Supermedial, and Medial Rocks.‘ More >>> 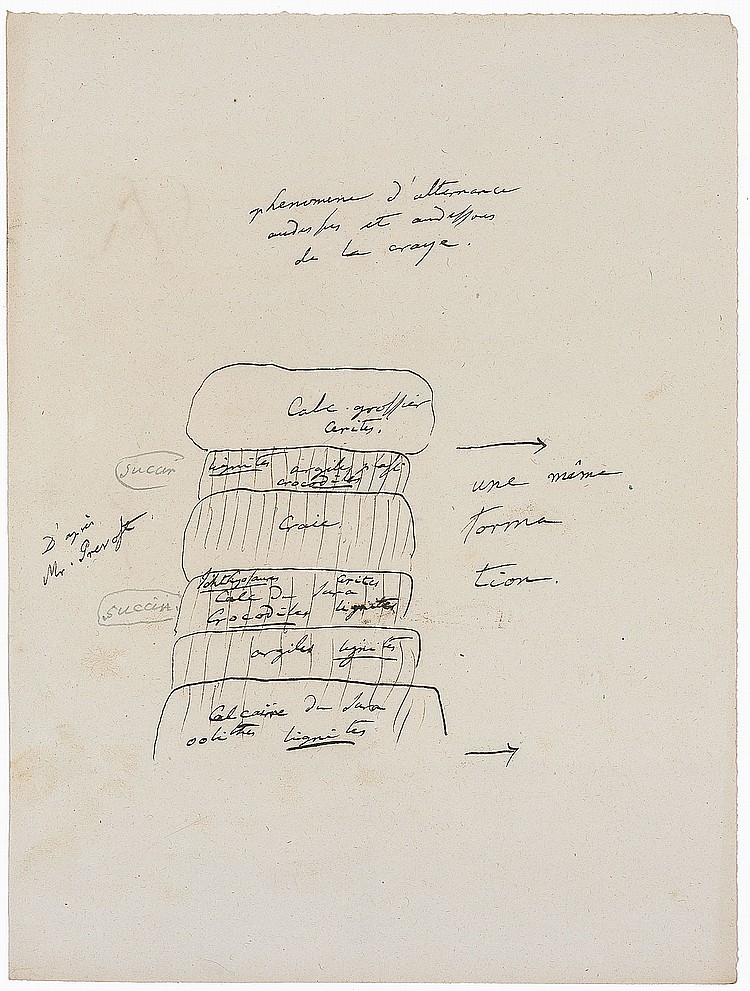 The auction will take place